After getting fed up with trawling the Games in Production forums in my last post on these things, I thought I'd cover just a few more games that are on their way:

The Dwarven Dagger of Blitz

Join Trevor Lostpick in miguel's medieval spoof. Latest on this one is that it is nearly finished, so lets hope we see it soon. 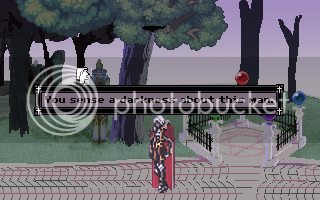 Nightfable is developing this alongside her Robots of Dawn game, which is great if both come out, but too many people try to do too much at once. Let's hope she doesn't overstretch herself and one or other (or both) of these gorgeous looking games makes the light of day.

Doctor Who Episode 1: The Soup of Doom

"Space freighter captain, Jack Ferrell and his crew of nine stumble upon a derelict spacecraft from the distant past. Hoping to claim the salvage rights, they enter the ship, only to discover that they are not alone on the ship." So basically Alien meets 7 Days a Skeptic. Aiming for a summer '08 release.

kanagon's adventure game looks to be well into development, based on the screenshots posted, but it also looks quite large. Let's hope George Lucas doesn't shut him down before the game is released!
Posted by SSH at Monday, March 31, 2008