Some blooming good games have budded up so far this month (sorry, had to get the flower metaphor in to make the post title work)... here's a quick overview: 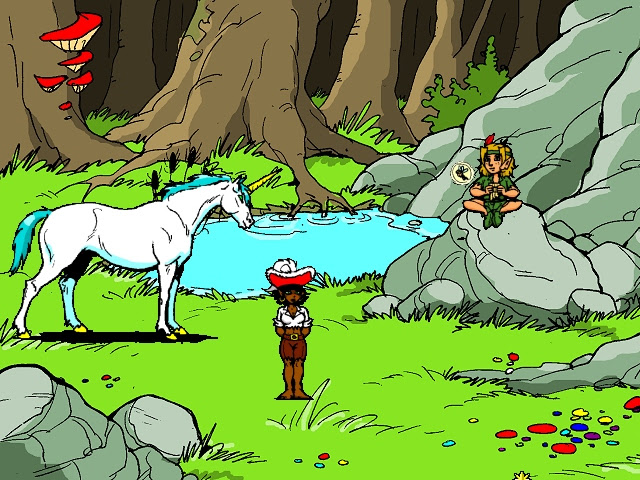 This French pirate-themed game seems to have great praise from people who speak the lingo. Marion has based the game on her online comic characters and people have been saying that its original and funny and maybe the next Nelly Cootalot. An English translation is expected soon.

Mentioned a wee while ago in the last review of upcoming games, this release had some teething bugs, but by all account with those problems mainly fixed seems to be quite good. The odd bit of dodgy voice acting is offset by good storytelling and atmosphere. Good effort from WHAM: I didn't even realise that George and Andrew had got back together after all these years, following in Take That and the Spice Girls' footsteps!

Shoot, I got abducted

The people over at AdventureDevelopers have a game design competition on just now and this is Ben304's entry. Bob the Hick has been kidnapped by aliens intent on nasty probe-type stuff. Reports are that its short and sweet, with a few glitches shortly to be ironed out of the first version.

The first part of Cosmos Quest may have passed many people by, and the second part confusingly has the same subtitle as the first. Perhaps this sun is taking longer to locate than first thought (try down the back of the sofa?) Anyway, this game has nice looking graphics with 3D-generated backgrounds. Help the Rhomulans on the Radion!
Posted by SSH at Tuesday, May 13, 2008