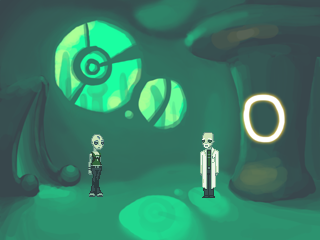 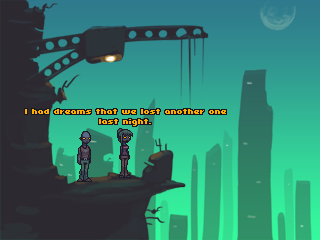 Nevermind the badly drawn screenshots!!
The man behind quite a few cool games this year (and we ain't done yet believe me, is now the fourth horseman of the Apocalypse(s). Yes, indeed its THE BEN 30FUR. Also known as Ben304. The guy is definitely wanting the award for short game, for he'll probably have all nominations as well.

1)Do you have a favorite AGS game?Or a non AGS game?

I have a lot of favorite AGS games. Favorite overall would probably be Reactor 09, favorite recent game would have to be Death Wore Endless Feathers. As for non AGS games, I have a ton of games I'd like to talk about, but instead of doing that and being boring I will only mention Planescape: Torment, which I only got around to finishing last year. Torment was a game that repeatedly surprised and impressed me, and really showed me that games have the potential to be a lot more interesting than they often are.

2)What's with the short games? ManBoy Vs Doctor Shock, Shoot!, Annie Android, Shifter's Box, Heed, Awakener, and probably another coming up while I ask this..

As I tell everyone when they ask this, I like short games. I consider myself very much a learner when it comes to making games, and I discover new things all the time! I consider all these games that I have made to be sketches - rough concepts or drafts of games, if you will. In order to make longer length games that I am actually satisfied with, I want to try out all these crazy ideas that I have in my head. Shorter length games allow me to test the waters, and see what works and what doesn't. It's also the reason that I don't make sequels.
3)When you first started posting artwork from a game you were working, we were all captured and excited about it. Yeah, its the "Where is Lode?" question. So where is it Ben?

Lode is on my hard drive, and hasn't been touched for ages. I do plan to release it eventually, however it had gotten to the point where I didn't enjoy working on it anymore - and when you're not enjoying your hobby, it isn't much of a hobby. Working on Lode was a fantastic learning experience for me, and I really benefited from working on it, however as a game I didn't think it was very fun, so I decided to leave it for a while and come back to it when I had a better grasp of gameplay design. And it isn't like I haven't given you other games to play while you wait!
4)You seem to have a standard team for most of your games(mostly Kaputtnik and his brother), does that affect the quality of them? And how flexible is that team?

I enjoy working with Sebastian. He has a passion for games and always tries experimenting with new ideas with each project we tackle - something which I feel is quite important. And his tunes capture the moods I try to fit into my games! He also is always suggesting things with regards to game design that I should focus on, and when I'm not being stubborn and try them out I realize he has some darn good ideas. David is someone I've only worked with a little bit, but he has that crazy Pfaller flair I've come to look for in sounds and music, and he's a swell guy as well. As for flexibility - I've never had a reason to look for anyone else to help me out, as they've been more than willing to tackle whatever I've thrown at them.

5)Long time ago, you complained on your blog, that you couldn't complete any games, now you're all into short game-making. What changed?

We all have ups and downs(edit: shhh!!!). I was disappointed at how little I got done last year, and going into this year I tried to approach it with a positive outlook and encourage myself to be productive and motivated. Game making has become my number one hobby, and I really enjoy doing it, even though I have slumps where I'm not interested in it at all. I've also been fortunate enough to have a lot of people say very nice things about my games, and if that doesn't encourage one to try harder and make even more and even better games, nothing will.
6)Are you planning on going on a ..medium length game?

I am in the process of building a longer game as we speak - and have been for a couple of months now. However, I very much consider this a long term project and I do not want to rush it and release a flawed game, so I am taking my time with it, and trying to get everything just right. This also means I will continue to work on other short projects while I am building it.
7)Which one (if any) of your games, you consider as your pride?
That's an extremely hard question to answer... and I guess I'd have to say all of them and yet none of them. Every game I make is built for a different reason, and try new things, so in a sense I love them all for the new things I learnt creating them. On the other hand, I always look back at a game and think "I could have done this so much better", so I guess you can say that I feel I have yet to reach my potential. If I have to pick one, I'd probably have to say Shifter's Box - Outside In, even though in a sense I wish I could go back in time and do it with the graphics that I produce now.
8)You don't quite attract any attention with topics on the games you're making, so I have to ask, any game you're currently working on? And care to tell us (or even show us)?

I am currently working on three projects (as well as ShattenReyze) - the long term one I mentioned earlier and two shorter ones that are more experiments than anything else, so whether I pursue them to completion remains an uncertainty. All three are science fiction stories, and the two shorter ones are a lot less lighthearted than my science fiction stories in the past, so they're really something new for me as a storyteller. As for showing you, you may have a screenshot of each (whether you choose to show all or one is up to you) - but bear in mind that all of the graphics here are still unfinished and will be polished further before any of the projects sees the light of day. 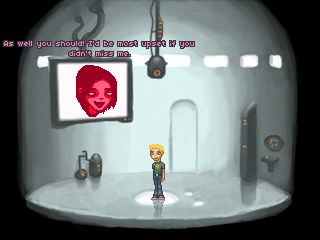