May be released soon?

Its been a wee while since I looked at forthcoming games, so here's a few:

A real-time Strategy game, this looks like a cross between Command & Conquer and Civilisation from screenshots so far.

Springtime in the Manger - Conception

Despite a title that sounds like The Producers take on the nativity story, the latest effort from anarcho (Emily Enough) is about a scientist's amazing new discovery in a dilapidated old research lab. Not many more details, but the screenshot looks great.

My Dead Husband, the Stranger

Based on the 1963 film, Charade, starring Cary Grant and Audrey Hepburn, this game tracks the adventures of Mel as she discovers that her recently deceased husband had all kinds of skeletons in his closet and her new friend knows more than he lets on... who can she trust? Graphics look simple and functional but music and story look very promising.

Electroshokker's Monkey Island-inspired game is now on its 53rd name (it was originally titled "Return to Monkey Island" and has now entered the "let's not infringe copyright" phase. Graphics are looking awesome and they've got a brand new website up... lets hope this is one of those "slow but steady wins the race" productions.

A dark and foreboding-looking adventure set in the 19th century Paris. Luc Beaumont escapes a stranger in the narrow streets of Paris by climbing through an open window into a house he doesn't know, and instantly regrets it...

The gruesome downfall of Joe Davis is plotted in this gory horror game. Joe's wife Lucy has gone missing and there's blood everywhere, leading to the room next door... The GIP thread is scary (and bloody!) enough in itself, but now there is also a demo available to download.

Michael Owen, not a top-flight footballer but a spaceship mechanic finds working aboard the Pelican transport vessel finds that life has got a bit... sick. Supposedly the first part of a series, but I've seen that phrase too many times to be too hopeful. Still, looks interesting from the details available. 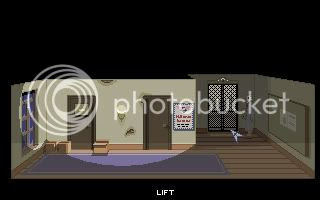 Darksiders Part I - The Curious Case of Mark Idalo

Mark Idalo is London during the Blitz's answer to Joey Mallone (from the Blackwell series). Mark sets out to solve crime on his own, finding a case that affect both living and dead. Looks great and a great premise, too.
Posted by SSH at Tuesday, May 06, 2008