Interview Part 10: Beam Me Up Scotty - An inside view 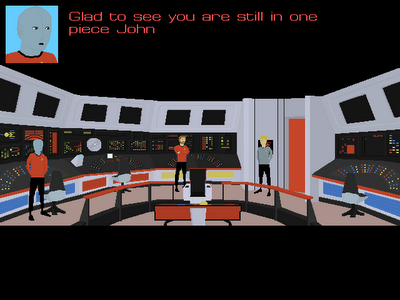 Prologue:
Star Trek Fans ahoy! Non-Star Trek Fans ahoy as well! Upper Tier Studios (namely Matt and Kenneth or Tier and Disco if you like it more), have been working on an epic 3-part series based on the Star Trek Universe. There may be no Scottie, no Spock, no god-damn Cpt Kirk, but the game still proves to be great fun. So with no further s$%@ I present you the interview to Cpt James Tiberius Tier


1) First question. A very classic one for you. Do you have a favorite AGS game?
A tough question as always. I definitely don’t have a favourite AGS game but there are definitely several that I have really enjoyed playing over the years. Obviously the Chzo mythos and Ben Jordan series’ are nice to play. They have such engaging storylines. I’m definitely looking forward to the conclusion of the Ben Jordan series although it will be sad to see it end.

Probably one of the more memorable stand alone games I’ve played was Nelly Cootalot – Spoonbeaks Ahoy. It had such a great art style and comedy storyline. Mmm, I should play that again, good times. I’m sure there are many more games I’ve forgotten but that is because I have a brain like a sieve.

(Indeed you have, but we still put up with you.)

2) You've decided to make a Star Trek game, completely disregarding the famous crew of USS-Enterprise. Was there a reason you want to share with us?

I do love the original characters of the Star Trek series but I thought this was a great opportunity to introduce a new ship and characters. It never really occurred to be when I first started making it to use the original cast for my characters. Hopefully people will warm to the characters I have created for the series anyway. You will start seeing more of the new ones as the series progresses. The last time I checked there are about 18 characters drawn ready to be introduced, eek!


3) You've said that the whole Star-Trek Newton games will be 3 parts of a trilogy, has that plan changed or the ending of the series will indeed be given on part 3.

I am definitely still going to be making this as a three part series. The reason for this was to make the creation much more manageable since I am still getting to grips with the engine (after 8 years…that is bad). It is likely that we will be making future three part series’ with the same characters, but that is another story for another day.


4) Everyone really likes the style of the backgrounds especially when we can see intern parts of a wall or a tube or a machine. Where do you get your inspiration from? And how long does it take to make one? 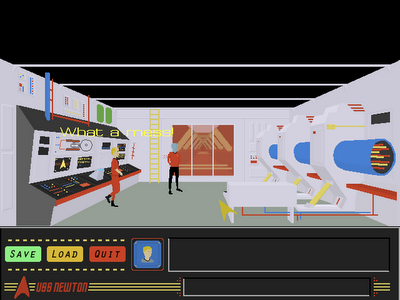 They style was mostly born out of a lack of art skill. I have watched a lot of the Star Trek Original series and thought that the colors of the sets were quite flat so I thought I would carry that through to the games. It worked out quite well for me I think.

It can take me anywhere between 1 and 3 hours to create a fully working background depending on the complexity. In the first game a lot of the corridor scenes were quite easily reproduced but in part 2, I have tried to make every room look unique which has made the creation process a little longer.


5) Will episode 2 feature any Star Trek cameos? Like Scottie?

The closed nature of the story means that it is unlikely that there will be any cameos featuring in the three games. Maybe in future episodes it could be fun to bring some original characters in, as long as I could do them justice. I am scared I would completely ruin their characters! I’d really love to use some of them if I could though.


6) You're working on this with Disco. Is he a real help? Would you say that you guys have good chemistry?

Our mutual interest in Star Trek means we are working on the same wavelength. In the first game he mostly did animations (good ones!) but in the second game he has also been providing me with puzzle ideas and he also drew a character for it. I think we work quite well together and hope it will continue in the future (as long as he doesn’t show me tunabeard again).


7) Unless I'm mistaken you and Disco will go to Mittens 2010 in Italy, are there any plans on blowing the rest AGSers' mind with a playable version of Star-Trek Newton 2?

I’m definitely going to be blowing their minds with something (*hides shotgun*). I will probably bring a copy of the latest build to Mittens to see if anyone is interested in playing it. Hopefully I will have a little time to work on bits of the game while I am in Italy since I will be bringing a trusty copy of AGS Editor with me and a really bad netbook!


8) Is there an estimated date of release for episode 2?

Good question. Originally I was planning on getting it done a long time before I left for Mittens but things haven’t worked out that way. Since I have pretty much no coding background, it has been difficult learning ways to script the puzzles I wanted to include. Fortunately, the hardest part is behind me and I am now in the process of finalizing the coding and puzzles while Disco finishes animating. I would like to say it would be ready by October (Wow that is almost a year after the first release) but it depends on how hard we work on it. Don’t worry, loyal fans, it WILL be released eventually.

Epilogue: Have a play at the episode 1 of Star Trek Newton, by visiting this hyperlink! And have a look at the episode's 2 in production topic here.
Posted by Dualnames at Tuesday, July 13, 2010