Tonight's show features an amazing man and an amazing game. I've had the luck to give it a try, and yes, it's fantastic. While many wonder where is Technobabylon's latest installment, Technocrat / James Dearden, comes with another short, but yet fast paced and enriched game.
THE RAIL 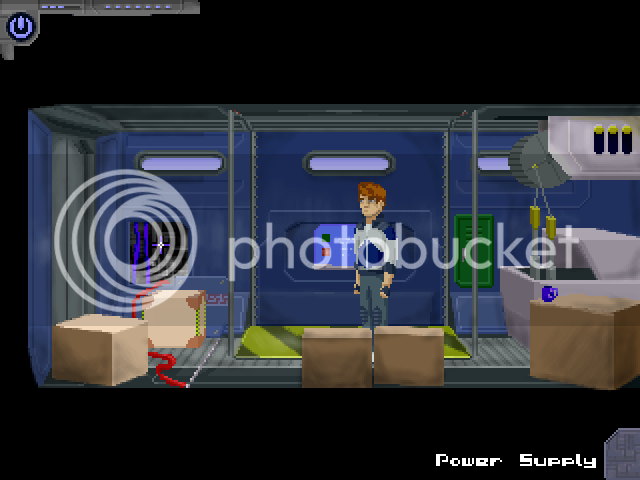 The game was originally showcased in AdventureX 2012.
1) Why and how did you join the AGS Bake Sale ?

I got in a bit late - I first saw it on the forums a few days after it had been floated, and volunteered to make something for it. In fact, it spurred me into production of a quick game for it. I now know I can finish a project like this within a one-month schedule. At first it seemed like it was getting a bit too crowded, so I pulled out voluntarily, and then after others had announced that they'd be unable to finish in time, I decided to put it back in again!

2) Talk a bit about your game (what is it about, how you came up with it).

It's essentially the story of someone completely unqualified for the situation they're in, both in terms of what they're supposed to do and what situations arise. Essentially Viktor, the protagonist, finds his cargo train hijacked by terrorists - and if he can't find his way off, he's going to end up an unwitting suicide bomber. Much like other games I make, it's kind of a fusion of three or four separate ideas, most of which I get through seizure-induced hallucinations. I wanted to do something on a train, I love sci-fi, and the transplanetary track that it's set on gives it an uncomfortable isolation.

3) Tell us a bit about yourself and how you got yourself into game making in the first place.

I've been making games since 1996 thanks to Klik and Play, but mostly ghastly and lazy attempts - "Stonehenge Racing and Gardening" and "Nancy the Happy Whore and the Pirates of the Third Reich" didn't quite take off, but in the last couple of years I've started to make things with a better approach. Ideally, I'd like to be able to start selling games, possibly even Technobabylon, but I'm seized by different urges so often, I've no idea when that'll come to pass. Probably when I don't have to worry about money!
Posted by Dualnames at Friday, January 13, 2012