While the conspiracy theories behind the number in his nickname, grow, Ben304 has made another gem-to-be, named FALLING SKYWARDS. And along with it comes a screenie to hook you with it. 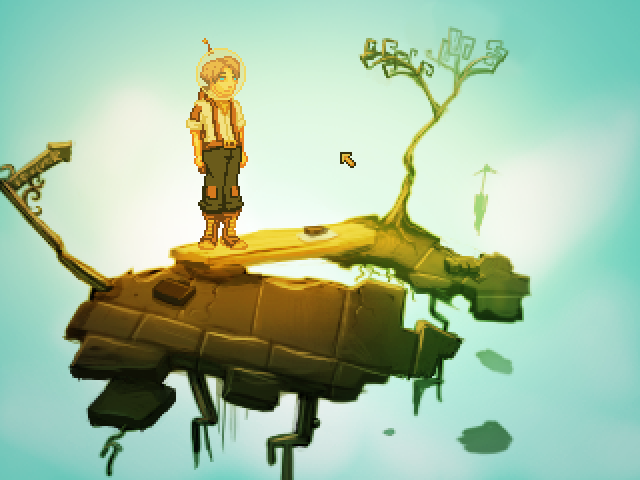 1) Why and how did you join the AGS Bake Sale ?Because when Ponch asked me, I was looking for a project that I could do in a few months, and it seemed something new and exciting to me as a developer, a chance to join with other developers I admire to each contribute a bit to one large project and raise some money for a good cause at the same time.When he first mentioned it to me, it was just a couple of us talking about it, but we soon recruited more bakers for our ranks and the project really took off. Despite all the stumbles, it feels great to see all the amazing games that've been cooked up.2) Talk a bit about your game (what is it about, how you came up with it).The game I developed for the Bake Sale is Falling Skywards. It came about after I had played quite a bit of Fallout 3 and Fallout New Vegas, and as a fan of all the Fallout games I thought it would be nice to try and do a post-catastrophic setting that was a little more fantastical - which explains the floating pieces of land - and focus more on memories of the old world than mutants and things. During the development I played, finished and loved Bastion, and the "platforms in the air" setting is quite similar (although I started playing Bastion after I started making FS, so it wasn't really a huge inspiration), but it definitely helped me think about the idea of isolation and memories of an old world.I don't think I could really pinpoint what the game is about if I tried, it really took life as I built it and evolved into the finished game, rather than me having a totally clear vision and putting it together according to that. Hopefully it will still be satisfying and cohesive to players. Perhaps people will think it's Lode with new graphics, haha.3) Tell us a bit about yourself and how you got yourself into game making in the first place.I got into game design because I used to spend more time thinking about how I wish games were than I did actually playing them. Now I can't stop because my head is filled with ideas and they just keep coming. I'm a laborer, part time musician and make games with every chance I get. That's enough to keep anybody busy. (If you want to learn more about me, play Grundislav's Bake Sale game, it's 304% accurate).

<3 Ben (That probably wasn't intended to be part of the interview, but oh well)