An interview with Snake, the man behind Leitor's Edge!! 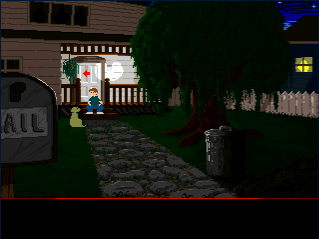 After all these years my favorite AGS game is still Hugos House of Horrors Remake, by Spyros. There's been plenty of great games over the years, but for some reason, there's something about that game. The music drew me in and the animations I especially liked. It was a great AGS adaptation of the original, which I had not played until long after playing this one. The AGS version was completely mouse driven while the original was strictly parser based... if I'm not mistaken of course.

Spyros did an ace job on that game.


2)Snake..Does the nickname have anything to do with Metal Gear Solid?

Heh - it has nothing to do with it. The nickname is actually a real nickname that a friend of my grandfather gave to me when I was little. I'm unsure of my age at the time, probably around 8 or so. But anyway, I used to stick my tongue out at him every time he spoke to me, so he started calling me Snake. And it stuck ever since. I'm called Snake more than I am Tom. I couldn't imagine having a different forum name.

2A) You seem to be very friendly for an oldie, and I barely recall you posting on a "Forums nowadays suck" type of topic..why's that difference?

I've been around the AGS forums since, at least, late 2000, back when it was on EZBoard (I was known as SnakeEggz there). I've seen quite a few people come and go. The "spirit" of the forums haven't gone (which is why those topics are rediculous) just certain individuals and the type of conversations and debates that they would spawn. I think that's what these people are refering to when they start these topics - they miss the old days with members that are no longer around. I've never really been a big part of discussions but I've read almost all of them... sometimes posting for comedic relief if need be - not that I get many laughs, but I'll try.

Most discussions that pop up with newer members have already been hashed over 40 times before, but with different members, you see it all the time. But even though these topics have been discussed before, they are always different because there are different people sharing their different views - it's not the same people over and over again.
What I especially find funny is when somebody who was new to the forums 3 or 4 years ago, complains about how the forums have changed.

Personally, I have just as much fun on the forums now days than I did "back in the day".

3)You've been on these forums quite a long while, and from 2003 or so, people are anxiously waiting for a game of yours, The Legend of Leitor's Edge. Recently I noticed you started working on it, releasing an April fools joke. So to finally reach to a question mark, how's the situation on the game progress? Are you working on it?

Yes, we've been working on it tremendously, especially this year we've made much progress with the story. Exactly one year and a day ago, we started rewritting the story. We gave it an almost complete rewrite. A few scenes are the same and the atmosphere is untouched, so in essence, it is the same game that people are looking forward to. A couple characters, along with their storylines, were taken out simply for their absurdity. New characters and storylines took their place, and I must say, are fantastic and work flawlessly within the main story.

Game progress is still in it's planning stage as to get every wrinkle ironed out first before I go and do programming and more artwork.

Lately progress has come to a screeching hault when a little over a month ago we discovered a hole in the story. Very little progress has been made as of late. I mentioned on my website that if this doesn't work out, Leitor's Edge is finished. I'm done rewriting it.

So currently our main focus has been this one thing before we continue on. I'm sure it'll be fixed, it's not something that would require a total rewrite. It's just been very mindbending.

4)Some time ago you posted on the forums that your game is getting you down, how's that?

It all boils down to being insecure about the game itself and whether or not it'll be as good as it sounds and as good as some of these people are thinking it'll be. There's just so many games out there that are recognized and talked about years after their release. I want Leitor's Edge to join them. I want it to be one of those games that is remembered (as does anybody else with their game).
I certainly have doubts that I can deliver what I can imagine as a great game.

5)Can you tell us a bit about the story of the game?

The Legend of Leitor's Edge is a science fiction story revolving around a boy named, Seth Reece, who accidently falls through a portal that sends him through time... only for a brief period. After being returned through time, Seth is unaware that he indirectly changed, not only his life, but the lives of everyone around him, creating a parallel universe. Now, with the discovery of a means of traveling the 4th dimension, one person threatens, not only Seth ever returning home, but existance itself.

6)The gameplay at the topic was said to be similar to Choose-You-Own-Adventure Books. Comment on that.

Yes, that was the original plan. I'm not too sure how much alike it'll actually end up being since the rewrite. But there will still be options that you will be given once and again, like CYOA books, that will change specific things through the course of the game. And other things that will not be so obvious that will change outcomes here and there (where you are not given choices), depending on the way you solve a puzzle for example.
But no, it won't be as dramatic story/character-changing as CYOA books. By that I mean;
choosing to go in through the front door or try to sneak in the window won't change a character's personality or anything. A good example in a CYOA book is an example somebody gave from the forums:
This person had said that he had read a CYOA book where at the end you had two options to choose from. One option made a specific character end up being the evil character in the ending, but in the other option a total different character was the evil one. That stuff just doesn't make sense to me.

Everything that changes in Leitor's Edge will still revolve around the same story, just different paths. And of course there will be a few different endings.

7)Wondering, who's still helping you with the game? Initially many forum members were part of the team, but then some changes happened, so I've lost track.

Currently it is just Me and David Olgarsson (Rincewind is his AGS forum name). I don't know where this game would be if I was working on it alone. It certainly wouldn't be as good with out David, that's for damn sure. He's given more to this story than I can even describe. This game is no doubt, our game. Not mine. Ours. I hope to be doing possible sequels with him.

Originally, back in 2003, I was working on it alone. Then I recruited Dave. After a while Dave didn't really have much time to work with me on it so I asked him if he thought it was a good idea if I asked on the forums for new members. He agreed after a bit and was sorry that he could participate as often.
The project then ended up with two more members, Vel ("Who Wants to Live Forever?"), Yufster ("Beyond Reality"), currently known as Meowster, and Squinky (Pirate Fry 1,2,3, Demon Slayer...).
After a while this got too overwhelming for me, which David did indeed warn about prior to, with opposing ideas and just WAY too many things going on at once. David called it, "Too many chefs in the kitchen"... heh, I love that phrase.

Vel, Yufster and Squinky are great people, but I ended up telling them that I was relieving them from the project, I think not even a year later. I still feel like an ass. I should, I mean, I jumped at the idea of more people without thinking too much into it. You live you learn, I suppose.


8)Are you planning on releasing this on a certain date, or that seems highly doubtful?

There is no release date. It'll be finished when it's finished. The only thing that is certain is the updates on the SITE.
Posted by Dualnames at Monday, September 28, 2009