So second interview and this time it's Vince Twelve (XII), the man (not just him) behind Resonance. Look down... 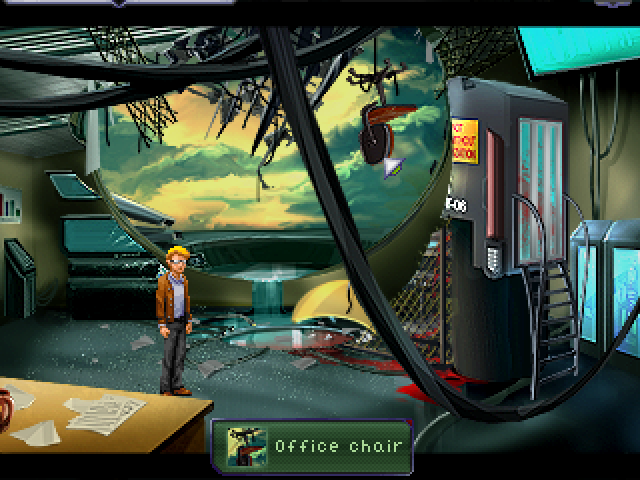 1)This is getting typical, but well, got to ask, what's your favorite AGS or non-AGS game?

Among AGS games, Nelly Cootalot, Gesundheit!, La Croix Pan, The Blackwell Series, Shifter's Box, Reactor 09, Cirque de Zale, and tons of others. Non-AGS games, wow, too many to count. I love the Myst Series, The Longest Journey, Silent Hill, The Dig, Portal, Braid, Armadillo Run, ummm... tons. I generally go for the more serious stories rather than zany comedies. I just love getting drawn in by immersive Sci Fi or Fantasy worlds.

2)How did you decided to start making games in the first place?

I've wanted to make games for as long as I can remember. I remember drawing huge Final Fantasy-like world maps with my friend on the floor of our fourth grade classroom. That interest led me to majoring in Computer Science, and eventually to where I am now, as a hobbyist/indie game maker. I might try the jump to a real game company some day, but for now, I'm satisfied with my business software development job, which pays the bills and feeds the kids, and my game creating hobby.

3)You've recently moved from the one side of the Atlantic to the other, and you've got a nice big family there. When do you get time to work with Resonance?

Actually, it was the Pacific! About a year ago, my wife and two year old moved from Okinawa, Japan to Omaha, Nebraska, USA. And recently we added one more kid to the family, so yeah, I keep busy. Other than the odd lunch hour, most of my Resonance development time takes place when every one else is asleep. I get a lot done on weekends, when my wife and kids are taking naps, and every night after 10 PM after everyone's in bed. I stay up most nights until 12:30 or 1 working and then get up the next morning at 6 to go to work. So I'm running myself a bit ragged, but I'm very dedicated to what I do.

4)How did you manage to gather a team full of talented people? Nikolas for the music, ProgzMax for pixel art, MashPotato, JBurger, You, Deirdra...So how?

Yeah, I absolutely love collaborating with highly-talented people, and I'm doing a damn good job of it on this project, if I do say so myself (and I do). Nikolas was the first team member. We worked together on Linus Bruckman and became good friends, so that was a no-brainer. To attract more talent to the project, I wanted to have some major work done to demonstrate my dedication and help sell the project.

So, after I had written the entire design document for the game, laying out every background, character, plot point, and puzzle (though it has changed quite a bit since then) I went looking for ProgZ on the AGS IRC channel. He was my number one pick to be the artist for Resonance, and to my surprise, he jumped right aboard! He actually had created the first concept version of Ed, the main character, within 20 minutes of me pitching the game to him! It was a bit harder to find the backgrounder, because I didn't have anyone in mind, so I posted ads around the internet looking for artists and got several replies. I talked with ProgZ and Nik and eventually we picked Nauris Krause, who has been doing an awesome job with the backgrounds ever since! Mash, Deirdra, and JBurger all came a bit later. I asked Mash specifically if she could do some character portraits. And Deirdra and JBurger both answered some open calls that I put out on the forums and on my blog looking for writers and artists, respectively. I'm super happy with the team that I've got working on Resonance. It's a very talented, very international group of game makers!

5)I'm not sure about the rest out there, but I've really noticed a very innovative and very impressive interface. But there has been a talk whether the interface will be user friendly. Comment on that.

Who's talking about that?! :) I can guarantee that the interface will be easy to use. I tested it out on my Mom! I have previously worked as an interactivity designer focusing on usability at a giant multi-national corporation, so I've got some experience in this arena. Because of that work, I find myself always nitpicking the interfaces of other games. I don't know that the interface will be perfect for everyone (is any interface perfect for everyone?) -- some people may not like it because it's different from most other adventure games -- but it should feel immediately familiar and natural. So hopefully it works out well!

6)From the poster and some of your posts on Twitter and XIIgames, I've seen that the story divides into four chapters (based on feelings), but I've yet to get a grasp on the plot. Want to tell us more about it?

Actually, the game has three acts. There are four playable characters, though, and that's who you see on the poster. But, yeah, the story takes place over three days, and each day makes up one act of the game. Each act is pretty different in tone and feel. Act I is the setup of the characters, setting, and plot, but keeps mixing up the gameplay to keep you on your toes. Act II opens the world up to more exploration and is more similar to standard adventure game pacing. And Act III pulls everything together and sends you spiraling towards the conclusion. Each Act has it's own set of goals and motivations, so it should keep things interesting! The plot surrounds a new discovery in the field of particle physics. Something that could be used for great good or great evil. So several different shady groups are after the research, and you have to make sure that you get it first! That's all I'm sayin'!

7)The graphics, the animation, seem all to be of high product value, so how much will this game cost?

The price point is undecided, but I can practically guarantee that it will be more than the fifteen bucks that it currently costs for a pre-order over on Kickstarter

8)It has been previously said that AGSers don't really buy commercial games (even AGS ones), your thoughts on that? And how did you decided to go commercial?

I think that people interested in the game will buy it and people uninterested wont. I'm not too worried about sales numbers or profits, really. I started this project because I wanted to make the game of my dreams, so I've invested hundreds of hours and thousands of dollars over the last two and a half years to make sure that it got done and that it was of the highest possible quality.

I don't know if I'll break even on the project in the end, not really sure what to expect, but that was never my goal to start out with. Though, I did make the game commercial to help justify it to my wife. :P

9)When are you planning that the game will be ready?

10)Final question, if you would propose a game of yours to someone, which one would that be?

I would show everybody Linus Bruckman, which I'm still super proud of three years after release. I think it's clever and unique and bizarre; all things that I love about games. It's not for everybody, definitely, but I'd like to think that people who like hard logic puzzles and brain twisters or just weird stories will enjoy it.


Thanks a lot for the interview Vince, it has been a pleasure! If you want to find out more on Resonance, go to the XII Games Website Section
Posted by Dualnames at Thursday, September 24, 2009