Capitalist pigs must stop reading here.
-Soviet Unterzoegersdorf-Sector II (or Time to kick some Nazi Ass, and not cartoony styled one): 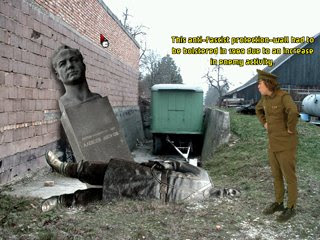 From the team that brought to you the first part, surprisingly enough (:P) they bring you it's glorious sequel. With a graphic style of realistic rendering of all actors, who happen to be real persons, or at least I think them of as such, and with the humour being it's best asset, it's time to have some real communist party fun. The story takes you after the fall of the great Soviet Union, where you must be save a comrade. The game's audio is probably compared to few, if not to none. With a nice collection of music and a very nice job done in the voice acting sector (II), there's really some job put there. Visit the site of the team here. A site that really has a cool style. Especially the choice of language was really inspired. Also a small review (size doesn't matter) can be found at the Gnome's lair

Dare I beg for an excuse for not posting about this sooner, comrades?!
Posted by Dualnames at Tuesday, March 10, 2009