Back from Outer Space

Long time, no post indeed. Things have been wild for me lately, and I'm trying to do as much as possible but don't we all know day has only 24 hours or so?

To keep you up-to-date:
-Games you should add to your playlist?!
Yep, indeed those suckers. AGS Forums, In-Production thread appears to have tons of posts while summer just appears faint in the horizon.

-Doctor Who: Episode One - Peace and Goodwill:

Cirius seems to have a really affective love with the quite famous TV-Series. And he's proving his love and passion by creating low-res wonders. Yep, he's admitting he's quite slow at making it, but dare I say, he's also quite good. He's also offering a demo for your eyes only! Click the image on the left to start downloading. 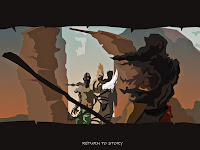 Frankly, I don't know what story did Wayne Adams came up with, and frankly with the game looking so surreal and reminding me of Nausica of the Valley of the Wind (an anime movie), it doesn't really matter at all. I really would spend all my dollars to get my hands on this game, if it wasn't free!!! Hope this is finished as fast as possible. 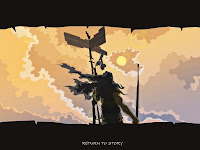 Damn doesn't that really looks great? Or is it just me?
It's actually the first time I "honour" a game with two screenshots.

-Kuma Story (Or how to draw few and let others imagine):

SpacePirateCaine or Luke Rideout, has began working on a very cool looking game of his own. A short of a weird story, but a teddy bear can have it's own adventure. The game really has quite a mix of different styles, resulting in a cute looking game. Not too many details on the backgrounds (on purpose), quite one of the best animations I've ever seen on a AGS game, and hopefully will get a good musician (Mods would be just nice) and the game will score aces.

-Now time to see what you CAN play:

-Shifter's Box Or how to sing somewhere over the Rainbow in Ben304's style:

Ben's really got the fire this month. He just can't stop drawing, not till he hits the floor. He's getting a cup grade higher with every two games he makes. So for this month, he made Shifter's Box. The game really reminds me of the Wizard of Oz story (it's not a rip-off, that's not what I'm saying). So far this one seems to be less dirty than the other one, and thank god Ben304 decided to kill that lens flare effect he had on his blog. He's making games so fast he doesn't even make in-production topics. He's probably faster than light... 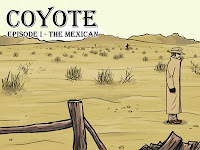 That's really a surprising game indeed. Quite short yes, but really fun and atmosphere really kicks some ass. If you're a western movie fun, you'll have some fun out of this. Largopredator has also made a talkie version out of it. I've yet to complete it, but so far it's really good.
Posted by Dualnames at Wednesday, March 04, 2009