How I found AGS and why I am still using it: Part I - Baron

Basically, the ever awesome Baron shares his story as a forumite from his perspective. It is as subjective as it is interesting. Behind the most intriguing games possibly ever made, an unsung hero of the community. Also the first man to coordinate the biggest team perhaps in indie game development and actually make a game out of it. If his only achievement was coming up with the full title of Besieged (a wonderful reference to a certain Kubrick film) I would love him the same. Respect from this very greek. If you have never talked to the Baron, pm the bastard and start discussions about the conquest of the world.

January 29, 2003: a day that will live in infamy in the annals of AGS history.  Or it would, if anyone ever wrote an AGS history -but that's another topic.  On this date I decided to stop lurking like some sort of creepy dude in the bushes and start participating in this community.  Can you believe I've been an AGSer for a decade!  My, the time flies when you're having fun.
But this is not going to be another gushing ode to the forum and its many temptations -I already exhausted that topic for my 1000th post last summer.  No, this rambling dissertation will attempt to account for the fruits of the vast amounts of time I have poured into AGS over an entire decade, with the aim of better understanding how I have evolved as an artist and where I am heading in the coming decade.  I'm also interested in your own AGS journey: where have you come from and where are you going?

So it all began for me back in the Silver Age of AGS: The universe had already cooled, Yahtzee had already left, and CJ only occasionally deigned to smite the odd mortal from his cloud-top perch.  And into this brave newish world I released the immensely silly AL-Quest 1: 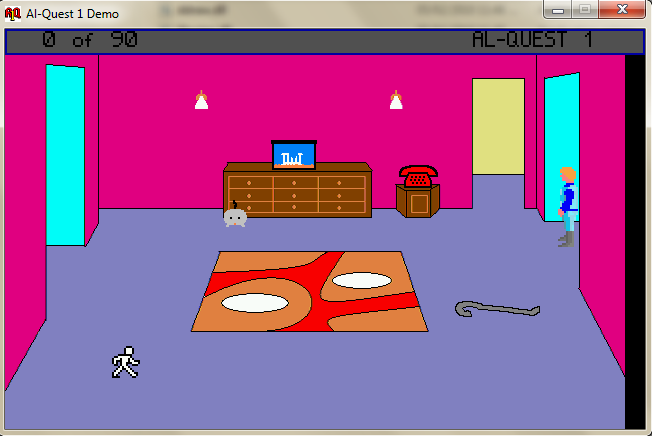 I'm not going to delve into the game's obvious graphical failings.  I remember carefully overpainting all of the original Roger sprites that I had ripped from the Demo Game, only to discover that I created a character 1/6 proper scale ....and then changing the plot to involve a shrinking sequence so that I could make use of the work anyway!  Suffice it to say I learned a lot, which is apparent as the game progresses, but I'm still amazed to this day by the fact that I created an entire game of such length (40 rooms) without learning even a line of coding.  In fact, I never would have gotten into AGS at all if not for the no0b-friendly interaction editor.  I still think it was a mistake to let that lapse....  Anyway, AL-Quest 1 was never a huge hit, although player feedback was in general surprisingly positive.  Like most first projects, it was a fantastic learning experience and served as a good stepping stone for my future endeavours.

The next game I finished was The Winter Rose, released in 2005: 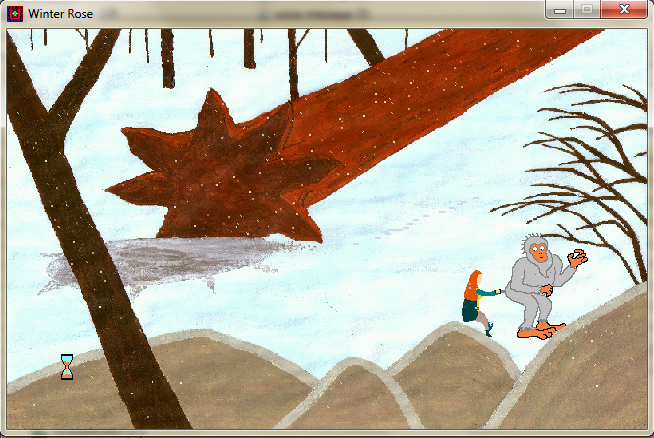 This project was a vast departure from AL-Quest.  Firstly, I made myself code everything -everything!.  Sure, I'd often use the interaction editor to see what code it would use to accomplish something, but it was 100% scripted by me.  I remember being so very proud of that fact, and of course the skills I learned in this process enabled me to undertake all manner of projects afterwards.  The game itself was graphically quite complex: hand-painted backgrounds with pixel work painstakingly made to fit in.  In terms of mood it was a much more sombre adventure than I had designed before, although as you can see from the screenshot of the heroine pulling a blade out of a yeti's butt I never did manage to tame the silly beast within....

The Winter Rose was very well received, but people were in general disappointed by the ending -I've tried to internalize that lesson in the endings of my subsequent games.

Next I worked on my opus, Charlie Foxtrot and the Galaxy of Tomorrow, a parody of the sci-fi genre released in 2007: 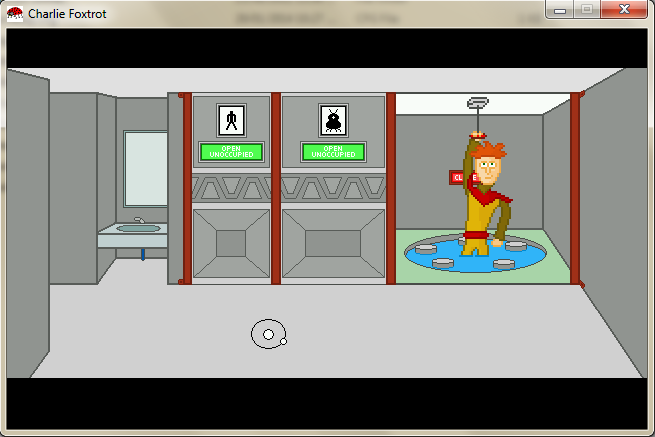 At 80 rooms this is the biggest game I ever finished.  The backgrounds are occasionally cringe worthy, and the MIDI music was a bit of a bust (which taught me to seek out the aid of competent musicians in future), but the animation is masterful -masterful!

Even today I am amazed at the sheer amount of animation, and by the fact that it was entirely done with MS Paint.  What was I thinking!?!  I don't even know what I could accomplish if I still had that amount of time on my hands.... The game was incredibly and intentionally silly -for the first puzzle you have to flush yourself down an alien toilet to escape the guards (pictured).  At any rate, the game was a bit of a cult classic, very much appreciated by people who like my silly humour.  I learned a lot about animation, but most importantly I learned if I was going to pursue more ambitious projects I would need to depart from my old methods.

So I decided to try collaboration.  The first attempt was with Yarooze with Besieged, released in 2008. 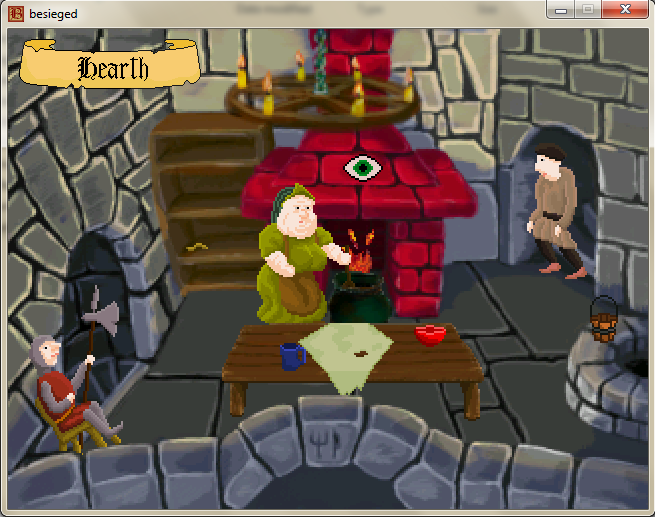 Graphically it is the best pixel art I've ever done (character art & animations -Yarooze did the backgrounds).  Funkmast's music was phenomenal.  The plot was about a lowly dung-shoveller who had to save the castle from a siege before the king catapulted him to death.  Perhaps there was a bit too much toilet humour (you literally had to sit on "the throne" a couple times to solve a puzzle), perhaps it was the authentic Olde English font that was slightly hard to read, or maybe it was just that I put it into the "short" category in the database, but for whatever reason the game never seemed to gain any traction with the players.  Considering all the work I put into the art, this made me reflect that if I was going to keep making games with my shrinking free time (ah, the perils of parenthood...), I would really have to streamline my work process.

So I collaborated again, this time with Ascovel (Igor) on a MAGS game, later expanded to a proper game with extra scenes, named Snakes of Avalon, released in 2010: 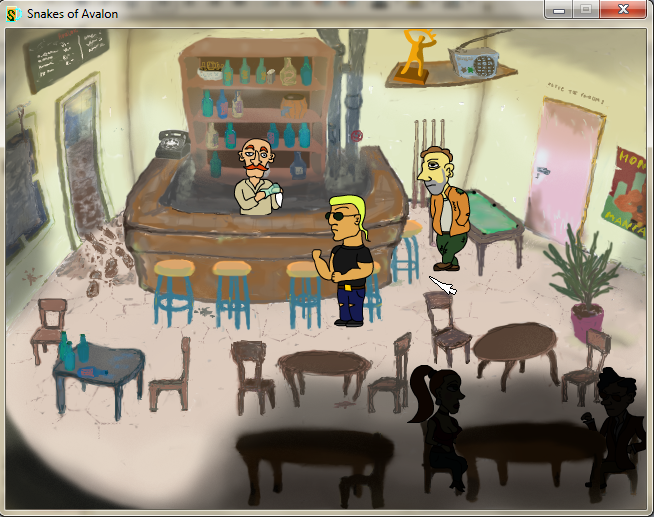 I expressly wanted to work on the animation using the vector power of Flash, but had a fantastic time bantering plot ideas back and forth with Igor.  While the animation was panned by the critics, the amount that I learned was well worth the effort, as I easily cut the amount of effort-per-frame by 3/4.  Suddenly the sky was the limit!  I was also very satisfied that the macabre plot and social commentary in the game were extremely well-received, but of course a large portion of the credit for this goes to Igor.

My secret plan for refining my skills with vector-animation was to undertake an epic fantasy project.  I haven't finished it, and have abandoned it twice already, but I feel Curses & Castles is an important part of my growth as an AGSer so I'll share it here: 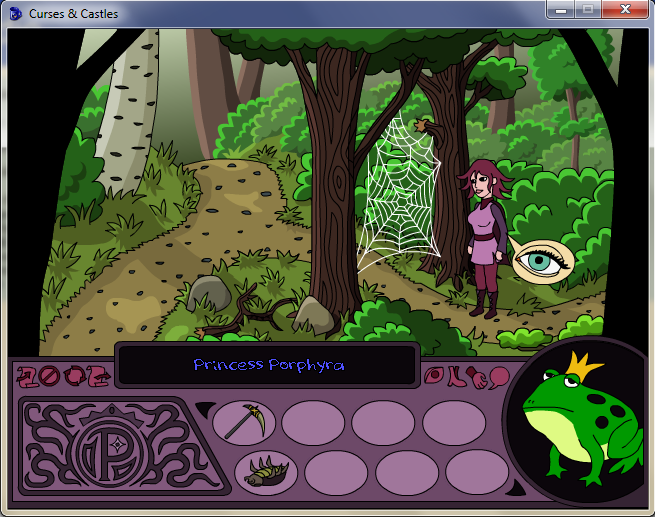 The lazy and sarcastic uncle-king has been turned into a frog (and ever present side-kick), while his dutiful princess-niece has to save the realm from five curses of an arch-sorceress.  The idea was to make a commercial adventure of epic scope and length, and I think that's why it failed (at least, so far....).  In retrospect it was too big, too ambitious for one man to actualize in his occasional spare hours.  When I pushed myself to burn the candle at both ends my health began to fail me, and it's been an off-and-on relationship between me and the game ever since.  I still believe that if I could pull this off it would be a fantastic game, but....  Well, perhaps one day I'll cobble together the means to pull it off.

A little depressed by the failure of C&C, I kind of shot my mouth off about a crazy new way of making games where everyone would do a minimal amount of work but together could create a masterpiece of game art.  While this dream of effortless game creation never really panned out (it was actually a lot of work!), the resulting Draculator II, sometimes simply referred to as "The Swarm Project", renewed my interest in the AGS community.  It was released in 2011: 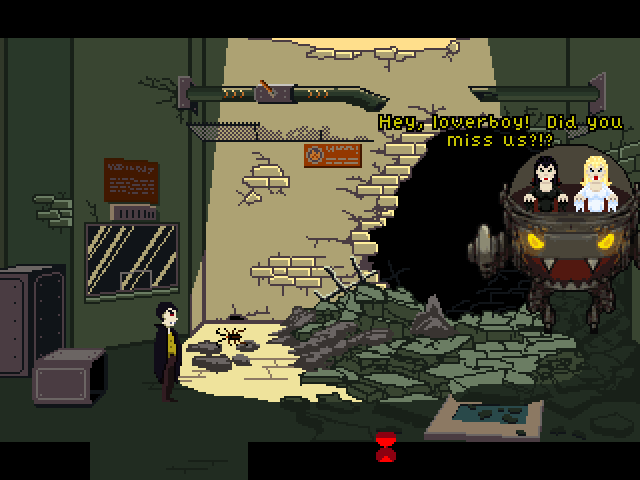 Despite the copious correspondence required to coordinate the efforts of 40 swarmers, I liked the challenge of trying to weave it altogether into a unique piece of art.  Yeah it was short, but I will always value the connections I made through the effort.  It's also been great to fall back on that network to find collaborators for other purposes, be it voice actors or people with technical abilities far beyond my own (ie coding, sound editing, music, etc. etc.).     You rock, Swarm.

After the swarm project I tried my hand at a shorter, hereto unannounced fantasy project tentatively called Flutterby Dawn about a secret agent pixie who has to combat the evil designs of the Order of Nefarious Organisms (ONO): 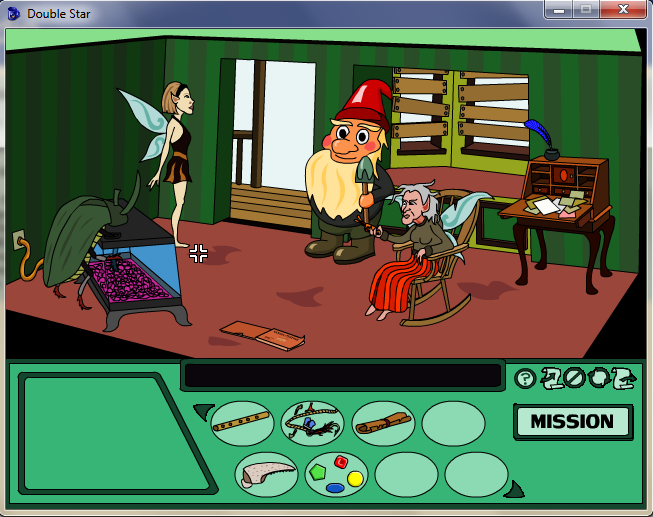 The background world was to be a living organism, with all native "technology" really just repurposed organisms (such as the sparkle vision set, pictured), and the plot a kind of James Bond-esque tongue-in-cheek spy thriller.  This time I spent much less time on art (very little animation, minimal effort on backgrounds) in an attempt to finish the game first, and then polish it up later.  Various strains on my free time (new job, no sleep due to expanding family, etc.) have also caused this project to be shelved for the time being, but as equilibrium is slowly restored to my life I can see myself picking it back up.

And lastly, I finally did finish a vector-art adventure, although you won't be able to play it until March or April or whenever the next Bake Sale is finally going to be released.  This is Blue Lobe Inc., the story about a trio of hapless adventure game developers who start their own company to make commercial adventure games (ah... sound familiar? 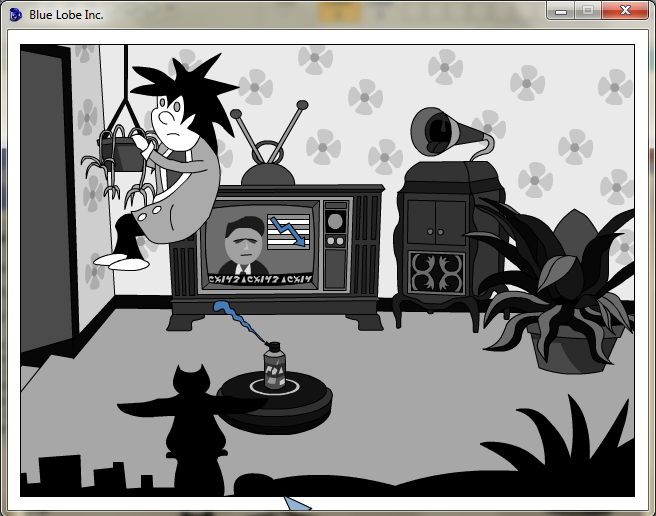 It's supposed to be a web-comic/game/cartoon about adventure gaming.  You'll notice more than just a bit of commentary about the classics, including the occasional puzzle twist from the past!  The game mostly makes fun of my own failed ambitions, while ironically potentially being a successful fundraising vehicle for the AGS community.  Only time will tell on that front!

So, in conclusion, it's been a long journey, I'm still puttering away at stuff, maybe one day I'll make that perfect game, yada yada, yada.  So how did you become the master game-maker of the future?  What's your last decade been like in terms of AGS productivity?  Share!