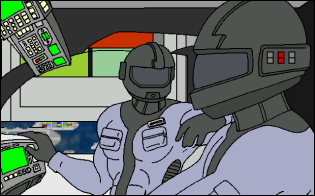 1) So, as per usual, no wait, what kind of nickname is Ponch, and what's with that obsession with cows?

Ponch was the nickname of a character played by Erik Estrada on the late 70s / early 80s TV show “ChiPs.” It was my favorite show as a little kid. Every week it showcased car chases, horrible freeway accidents, and women in tight shirts and tiny shorts. Come to think of it, it would be a good show for adults too. No wonder dad always watched it with me. “Get in here, boy! Chips is on!” Ah, so many father and son bonding moments in front of that giant, fake wood grain covered Magnavox. (We bonded over AirWolf too. That explains the flight suits Prick and Harry wear in the included screenshot).

Cows are awesome. They give us milk and leather and delicious steak. I couldn’t get through a day without a cow.

2) You have any favorite AGS game, or an AGS game you're anxious about?

I discovered AGS thanks to Larry Vales 1 and 2. They were great adventure games in the traditional style. But what I like most about CJ’s engine and the AGS community as a whole are the incredibly diverse things people can do with the program. Regular adventure games like Ben Jordan, old school arcade games like Limey Lizard, mind bending experimental stuff like Shifter’s Box, and games made to win the heart of that special someone like the Princess Marian series. Then there are the games that are made because the creator desperately craves the riches and adulation that being a freeware gaming mogul brings, such as Barn Runner. The sexy groupies and piles of money haven’t shown up yet, but I’m not one to give up hope easily.

3) About Barn Runner, apparently it has been influenced by Blade Runner, but I recall people telling you, or something, that the game has now taken a story and life of its own. Comment on that and why did you choose Barn Runner.

Yeah, Barn Runner originally grew out of a friend’s student film made back in the early 90s. He needed an idea for a five-minute film. Luckily, I had a pencil and placemat from a taco hut. I wrote the entire script on the back, next to the maze and word scramble.

Years later, I wanted to make an action-adventure game hybrid (like Cinemaware’s Rocket Ranger). So I dug out the old VHS tape, made a bunch of notes, and eventually it became the Barn Runner story bible. It’s worth noting that it the story is now so big and convoluted that it bears no resemblance to that original short film. But that’s where it all started. So now the truth is out: Much like George Lucas, I’m living off ideas I had when I was a much younger man. I even revised and re-released Barn Runner 2 a couple of years ago. Now if I could just find some way to put some ewoks in my games…

4) People that start playing the Barn Runner games, seem to get a little confused on the chronological order of games, care to explain it, and tell us a bit about the story so far, and where is it going with the new part?

If there were one thing I could do, I would go back and correct the numbering system the series uses. (See? There’s that George Lucas influence showing itself again.) For some idiotic reason, early on I decided to place the holiday games into their own numbered list, even though they’re still part of the regular series.

If you want to play the series start to finish, then skip Barn Runner 0 (it’s based on the short film, but not part of the game’s continuity). Start with Barn Runner 1 and play straight through to Barn Runner 4, then play Cyclone Alley and Wreck the Halls, then pick up the story again with Barn Runner 5. Plus, just to complicate things, there’s a Halloween game in between the two Christmas games, but it was never released because it was lost in the hard drive crash of 2005 the forced me to start all over again on The Forever Friday. But the Halloween game is still part of continuity and, one of these days, I plan to rebuild it and release it.

Like I said, it’s a confusing system and I feel terrible about it.

5) There has been a chosen date for Barn Runner Part 3: The Wild Brunch, which was February if I seem to recall, but you haven't managed to deliver it, want to explain us why? I assume personal life.

The entire Forever Friday effort has been a boondoggle from day one. I started working on it back in 2004, but lost a year’s worth of work when my brand new hard drive crashed, taking the entire game with it. I finally got back on track a couple of years ago with a much larger version of the story, but then 2009 hit and it’s been one setback after another. Too much work, not enough free time – Life in general, you know?

Keep in mind, that the original version of the Forever Friday was a two-part game like The Armageddon Eclair, and it was due in 2005. So a setback of few more months is nothing to me at this point.

6) On the site, some time ago, you said someone gave you a lot of money. Comment on that. And how much money are we talking about…?

A fan of Barn Runner contacted me out of the blue and asked if he could PayPal some money to me because he liked the games so much. I was really surprised at such a nice gesture and so I wrote about it on my site. That kicked off more donations from other fans. It was such a nice thing that it really warmed the cockles of my heart (yes, I’m so ancient that I have cockles – quite an advanced case of them, actually). After that, since I didn’t want it to seem as though Barn Runner was becoming a cash grab, I’ve tried to make a point of not mentioning it again on the site. I make enough money to keep a roof over my head, food on the table, and beer in the fridge. I don’t want people to think I’ve got my hand out, you know? Pay games are fine, and there are some good ones out there, but I’m want to keep Barn Runner a freeware series.

7) Is there any end planned for the series, if any? And would you like to tell us when is that going to happen.

The series definitely has an end. The ending of the story was one of the first things I wrote. I didn’t want to get to the end of my story and realize that I had to come up with something off the top of my head (remake of Battlestar Galactica, I’m looking at you).

As far as when it’s going to happen, it was originally scheduled for 2013 or so. But remember that according to that same schedule, the Forever Friday was supposed to be done in late 2005. By the end of 2009, I was already supposed to be prepping Barn Runner 7: Recycle My Heart for release. So who the hell knows when the story will finally be done, as told in Barn Runner 10: This Shameless Tomorrow. Like I said earlier, I’m all about the perseverance.

And what’s going to happen at the end? Even if I were to tell you, there’s still too much story left to unfold for the ending to make any sense yet. But I’ll give you some clues. Somebody comes back unexpectedly. Somebody gets thawed out. Someone has a secret admirer. Someone takes a psychedelic trip. Somebody gets a haircut. Cheese is stolen. Christmas is saved. Noriko takes a shower. The Mayor takes a bath. Debbie and Noriko both use parachutes, but not together. Prick gets a new car. And the Chief makes a terrible decision and regrets it.

Also, everyone gets naked by the end.

And not everyone will survive to see the end of the series.

God only knows. Maybe January? I’m still working minimum sixty-hour workweeks. Hell, I’m writing this on my lunch break. Speaking of which, my Hot Pocket is gone and it’s time to get back to work. Thanks for giving me the chance to ramble on about my games.
Posted by Dualnames at Tuesday, October 13, 2009