Indiana Jones and The Temple of Spheres

-Indiana Jones and How The Hell Did I Forgot this?!:

Or how a three room game, can really take you back to the glory days of the past. First, I should apologize that we haven't said a word about this despite it has been out since the 10 of January. Secondly this game, is really a fine example of a short, but yet very enjoyable game. As the typical story comes, yes, Doctor Jones and the Nazis and all, you'll be wanting more. The graphics are so loyal to the original Lucas Arts game, you'll think that they're ripped. Anyway, 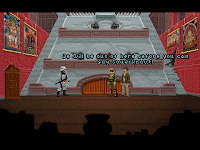 short yes, bad not.
The game is by Miez, and he's his debut in releasing an AGS game done mostly by himself. The rest are Mark Lovegrove (mods), Nacho, Big Brother, and dkh. So don't thank Lucas Arts, the graphics aren't ripped!!! Hope they remember than Fountain of Youth game. *cross fingers*