-"He's an anteater, with a punk rock guitaaaaar":

Anteater, has finally released his game which has been worked on, troubled on, and pissed off on, for a very long time, so he just hands it over. It's a mind-boggingly big game in size, that's for sure. And it's also 3D, and shareware..yep, shareware. But that's just nag screens saying.."FFS I only ask for a Five Buck". Nough on that, the game is really good and also has some replayablility value. But that's just me. What's your word on that? 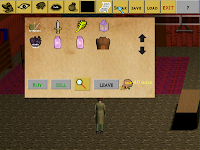 Beomoud, has finally been persuaded into show off a little of what he's making. Thank god for that. I'm a fan of those Black Isle games that appeared in the late 90's, and for a reason, his game is really giving me that sense of fear and adventure in my heart. The game resembles Icewind Dale and Diablo I and it also features 3d models in it. Another thing is that game really focuses on stealth (if you're planning on playing as an assasin) and also it might be expandable. Let's cross fingers.

Colouring Ball(14-27 Feb by Rharpe):
Can you draw a monster?

Background Blitz (27 Jan - Feb 11 by Ben304):
It's all about being creepy and loving to draw some graveyard...all left is the winner to be announced and some final minute entries. Bringing back from the dead rharpe's animation competition is as good.

Zyndicate says Classical, you say "What?":

Sprite Jam of course. The rules aren't really restraining so just see what others have done, and sprite it before the 24th.

There seems to be the time you guys that never finish a damn game, because you fear of doing so, come back at your enemies back and stab them to death. Isn't that swell?!No?!Ah flip your transistors man, it's seeing Leitor's Edge time...or Doctor Who Time or any other game authors are being consumed of like this: 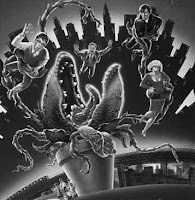 So go here and give us some taste.
Posted by Dualnames at Saturday, February 14, 2009