Gutter Comfort: How Snakes of Avalon became the flawed hero of indie games 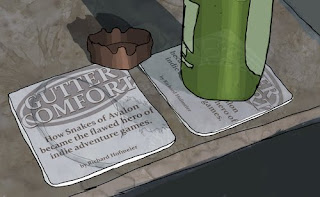 Dear reader,
I won't presume your reaction to these accusations, but I remain presumptuous in making them. You're an indie game fan, of course - but it's even more likely that you're one of a few hundred folks who considers yourself an indie developer. You make games, right? That's my best guess. Here's why that's worth remarking on, before we even talk about Snakes of Avalon: we have to agree on our shared context. INDIE GAMING's most salient grounding points are rooted in the notion that compromises in quality are necessary, because hey - You're on a budget (if you even have a budget) and you can't afford to rent a warehouse, let alone stock and staff it with expert light riggers, composite engineers, or a legal team. But, still, you somehow persist. The potential contribution of your Indie Game is greater than that of those so-called “AAA” games, which are inseparably bound to test audience consensus, board meeting red tape, and aggressive, ROI-minded streamlining. Your game would get watered down pretty fast in that world, and the bracing impact would be lost.

To them, your game wouldn't be worth making. To them, "indie games" are just a double-standard that grants freedoms and permits poor craftsmanship. But, still, you somehow persist. Because your story couldn't be told any other way. Because the greatest symphonies and poetry and novels and paintings weren't accomplished through market research and endured no sub-committees worth remembering - our great cultural inheritance is studded with masterpieces typically made by single individuals barfing their smelly guts out in either high-tone bravura or gritty greyscale, shown to anyone who will look. Now, to be worthy of this artistic inheritance and to make your contribution, you must persist without compromise. Indie Games are small, defiant stories told to anyone who will listen.

Snakes of Avalon is, in fact, a small defiant story told to anyone who will listen. We watch the storyteller barf his smelly guts out in the lowest of slapstick pathetia, but we're compelled by him. He's eager to glimpse the true, silently rumbling pulse of all meaning, but is interceded by his bouncing full bladder while respectable strangers look away with shame. Our protagonist is a failed man, once capable of greatness, who drowns his guilty blinking sorrow in a dive bar full of strangers. The more he drinks, the more he forgets, and it becomes easier for him to smile and for us to laugh along. Not a space marine or sexy gun-toting hero, but a drunken citizen, tearfully trying to remember a once shining truth and finding only watery beer - what can we do but laugh along as he stumbles. He's talking to a mounted fish, now! But still, he somehow persists.

If you've never been drunk and if you've never been a failure, Snakes probably isn't for you, indie developer. (Of course, that's no compliment to either this game or drinking. Or failing. Although I do recommend all three.) Because if you're going to create art, there are stern lessons to be found in this game - and though the vibrant punchlines are told boldly, they reveal the embarrassingly common thread of our ultimate ineptitude in the face of that true, silently rumbling pulse of all meaning. So, unless you've been a drunken failure at least once, you won't get the inside jokes. Also, get off the internet and work on your game, you unsoiled teetotaler. You've got a failure to finish.

Regarding the indie game double-standard I mentioned before, the game's creators Igor Hardy & Alex van der Wijst are getting by on charm. The main reason to play this game, the main reason to play any game, is for the story - which, in the case of Snakes, is as finely conceived and well-told as any other game I've played in years. The screenplay accomplishes its goals with warbling flourish - to further elaborate would necessitate the dissection of dialogue from character. Is that what video game reviews do? Or is it only done when the reviewer doesn't enjoy the game? Either way, if the writing IS the character who IS the art, then our gameplay experience is derived wholly from the blurry sensations of our melodramatic drunk; his ability to witness his immediate surroundings, his inability to do so, his desire to escape them, and his urgency to remember the greater truth of How did I get here, after all?

That being said, and as a small footnote to all of this, I should admit to being kind of curious about what these authors could make with a team of artists and animators? The "talking" animations were charming and, visually, Snakes is cohesive and self-reliant, but here's the deal. Double standard or no, developers (like yourself) are always at risk of losing the respect of their audience. Even though Hardy & van der Wijst have waltzed a wavy and deliberate line into risky stylistic territory, I can't help but feel that it's the finer production aspects that might prevent a wider audience from appreciating their great story. Voice acting is limited only to the cutscenes, and the recording quality of the spoken dialogue introduces those same old questions about developer resources and indie games and blah blah blah. The beneficial double-standard begins to deteriorate.

But, what if they had money to hire voice actors and a sound engineer... Or a team of animators? Or a 3D modeling engine? Who knows to what great heights this game might climb? Or yours! Just imagine how great your contribution could be, if only we lived in a world where profoundly written indie games have the staffs and budgets of those laser-sharp FPS cinemagasms that cost seventy five bucks to play. But it's only a dream, and one not worth sharing. I think we all know that it's better this way, and the joy of playing a game like Snakes of Avalon (or others like it) is that we're privileged to witness the creative process on its own terms. To play an independent game is to watch artists persist. In rare cases like this one, we get the chance to witness art being made. (I'd advise you to play worse games if you don't understand the difference.)

So, I propose we all drink a toast to Igor, Alex, and their man, Jack. Here's to cutting your own ragged path toward the truth. A toast to our shared circumstance - a huge, world-wide dive bar where indie developers like you and me can whisper our small, defiant stories and people will listen, all persisting into a night full of puns and sorrow, free drinks and infinite continues.

Richard Hofmeier is closest to glimpsing the unspeakable truth when speaking puns to empty streets at night. You can contact him through his website: richardhofmeier.com
Posted by Richard Hofmeier at Wednesday, April 13, 2011