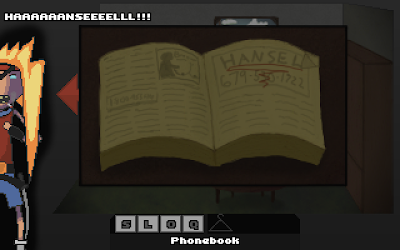 Tonight, we host DDQ, famous for being the man behind Oceanspirit Dennis, a craze of some people that just couldn't stay at puns. I present you the interview and a link at the end for the next OCEANSPIRIT GAME IN THE MOST EPIC SAGA EVER MADE.

If you ask what is Oceanspirit Dennis, then damn you, look here.

My favorite AGS game has got to be The Marionette. While it isn't necessarily perfect, the game is incredibly well-written and features an engaging story that personally has no competition. That's probably the best "experience" I've ever had with an AGS game. Honorable mention goes to Shifter's Box. Best one of late is definitely The Journey Down: Over The Edge. You should really be playing it right now instead of reading this.

For non-AGS games, I have a power trio. Paper Mario: Thousand Year Door, Half-Life 2, and the Mass Effect series. While the games themselves are widely different, all feature universes that completely immerse me whenever I play them.

2) What in the name of holy saint does ddq means? And what kind of a quote is "F%$^ the hypotenuse"? How did you come up with each of those?

Ah yes... that's something I've lost many nights of sleep asking myself. I actually created the name while naming my save file for Need for Speed: Underground 2 by randomly smacking the Gamecube controller and ddq5 emerged. I've kind of dropped the 5 since then. As for any meaning, the only thing I know for sure is that the first 'd' stands for "Drew," my name, and the second stands for "Dennis," my favorite name. The 'q' could mean anything, but imagine it's along the lines of "quality," "quadratic," or "quadriplegic."

"F%$^ the hypotenuse" is a phrase that my brain conjured up from the ether. When I first thought of it, I thought it would be the kind of thing you'd see on an xkcd t-shirt. It might also be related to the TV Tropes page "Murder the Hypotenuse," which deals with love triangles. Either way, I just find it catchy.

3) How did you find AGS? Who are the forumites that dragged you in ?

My friend and I were looking to develop an incredibly ill-conceived idea for a game. I looked around the tubes and stumbled upon Adventure Game Studio and thought it looked fancy. One failed game attempt later, here I am.

This was right about the time that a little fellow named Calin Leafshade had posted an audio file of himself reading emo poetry. Pretty soon, I had found myself entering the community during the flurry of activity that surrounded McCarthy Chronicles. But in general, I'd say the whole community was pretty nice for not treating me like the overeager little dips^&t with a bad game idea that I was one year ago.

4) Who is the real Drew? And how much did Igor Hardy paid you to join his awful blog?

Haha. Well, I'll start by saying Igor's an awesome guy and I love working with him. I won't that you should shut up and his blog could kick your blog's ass any day because that would be rude.

The real Drew is studying electrical engineering and computer science at university and enjoys good films, games, and music. He plays the drums and still enjoys Lunchables. He also just got a new desk for free and he really likes it.

5) How did you come up with Oceanspirit Dennis?

Ooh, this is a good one. The concept for OSD was conceived by several people. In our good friend and comrade iceygames' thread on RPGs, he showed a design for his JRPG protagonist, "Dave." I told him Dave was a stupid name for a Final Fantasy protagonist, you know how they are, and suggested something like Ocean, or Spirit, or Dennis. The first two being parodies and the third being my aforementioned favorite name.

Snake then marvelously suggested the combination "Oceanspirit Dennis," to which I appended "Scourge of the Underworld." Then I spent five minutes to this drawing, which I released to widespread acclaim. Then the illustrious Ben304 actually adapted it to a game and others soon followed. Thus was set in motion the wonderful world of OSD.

6) How do you feel about creating the idea for a bunch of games based on a mocking of a troll? Some people even called it a RON revival! Comment on that.

Oceanspirit Dennis had a quick but significant boom of games in the month after Ben released the first one, but it died down pretty quickly. I'm literally days away from releasing the next chapter in the OSD saga but who knows if it will catch on? If so, I think we'd need a common set of sprites and sounds and such, walkcyles and all that. While I think so far all OSD games have been released open source, they've all had wildly different styles.

Still, that allows game makers much more creativity with their designs. Whatever happens with it happens, I guess.

7) So you created another OSD, why? Wasn't there enough? Was this one has to offer?

Well, of the 5 or so games released, the one I did was by far the worst. It was just a so-called "Special Edition" of Ben's original game with voices and added homosexual themes. Also, while some of the OSD games were intentionally stupid as parody, I thought I'd enjoy seeing where I could go with a semi-serious comedy game in the universe. That's why I started Blades of Passion: An Oceanspirit Dennis Adventure. It's really more of an exercise than anything else. It'll be my first real game and I experimented a lot in creating it. Thankfully, I was able to round up a really great team who wanted to continue the OSD saga as well. Plus, Blades of Passion has a sex mini-game.

8) So when are we going to see that game?